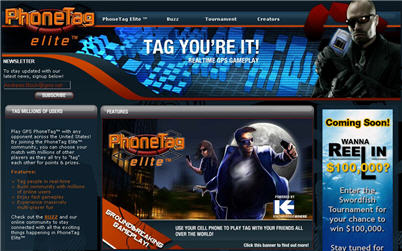 “PhoneTag Elite [KnowledgeWhere, Calgary, Alberta, Canada] turns hide and seek into a radical group sport across North America by using the mobile phone as a console for chatting and location-tracking. Available exclusively to Sprint customers across America, taggers can shop in-game at their favourite brand stores for tools to help evade capture and pursue targets.

“Anna’s Secret [by Jan Ulrich Schmidt, Hamburg, Germany] is a GPS driven, location-based learning adventure game for cultural content in the city of Weimar (Germany). A player walks with a GPS-able Pocket PC through the Ilm-park and passes sightseeings. Video clips show Anna and explain the sights, which have an important role in the game. On his way the player has to solve different quests and mysteries to solve Anna’s Secret. If he does well, he can find a treasure chest.

The story of a ghost that suffers from amnesia is used to immerse the player into the gameplay. Many videos show the ghost Anna or details of the park and its history. The game could be adapted to any other city, if the content and the story are modified.

Anna’s Secret is based on the game ‘geocaching’, but extends this play by video and film clips, multimedia features, components of a adventure game and a real, historical background story.

The project is a diploma thesis at the Bauhaus-University of Weimar at the professorship for media and interface design. It respects aspects of ubiquitous and pervasive gaming.